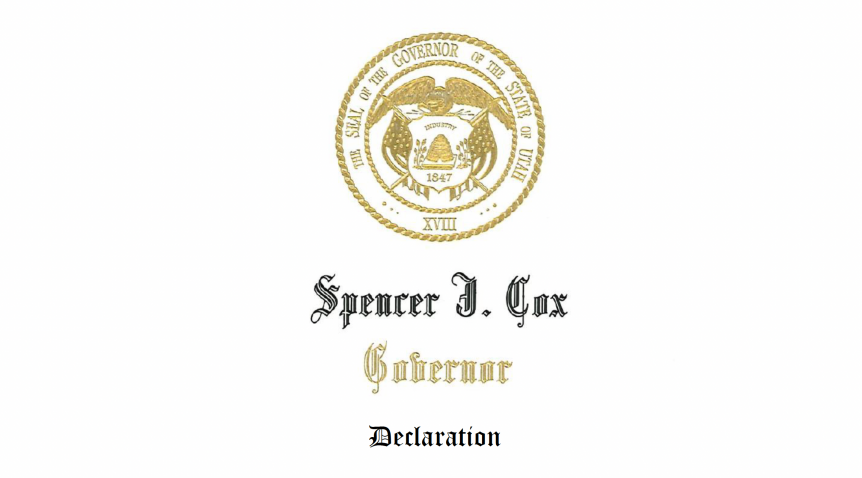 SALT LAKE CITY, UT — Governor Spencer Cox declared September 11, 2022 as 9/11 Day of Remembrance and Service in Utah and issued a video message calling for unity and encouraging Utahns to participate in an act of service. "This year on 9/11 Day, we will continue to demonstrate our unity through our service," Cox said in his message. "Through service alongside our neighbors, we can build more inclusive and just communities."

In his official declaration, Cox recognized the firefighters, law enforcement, military members, and other first responders who put themselves in harms way and even sacrificing their own lives to save others during the most deadly terrorist attack on the United States. He reminded Utahns of the strength and resilience of the American people that followed the terrorist attack of now 21 years ago. Finally, Cox encouraged Utahns to participate in an act of service in remembrance of the service of first responder, military members and the nearly 3,000 innocent lives lost.

Volunteer and service opportunities can be found at JustServe.Org, 911day.org, and ShowUpUtah.org.

The declaration reads as follows:

Whereas, September 11, 2022, marks the 21st anniversary of the devastating loss of nearly 3,000 innocent lives in the worst terrorist attack in the history of the United States;

Whereas, Utah will always remember and honor those we lost on that fateful day;

Whereas, we owe a debt of gratitude to the firefighters, law enforcement, military members, and other first responders who courageously ran toward the danger, and in many cases, sacrificed their own lives to save others;

Whereas, September 11th will forever serve as a reminder of the strength and resilience of the American people and our ability to come together in the most difficult of circumstances;

Whereas, Utah reaffirms our commitment to never forget and always defend the freedoms and ideals upon which this country was founded; and,

Whereas, in remembrance of the service of the firefighters, law enforcement, military members, other first responders, and the innocent lives lost, I encourage all Utahns to participate in an act of service today;

Now, Therefore, I, Spencer J. Cox, governor of the great state of Utah, do hereby declare September 11, 2022, as 9/11 Day of Remembrance and Service in Utah

A pdf version of the declaration can be downloaded HERE.