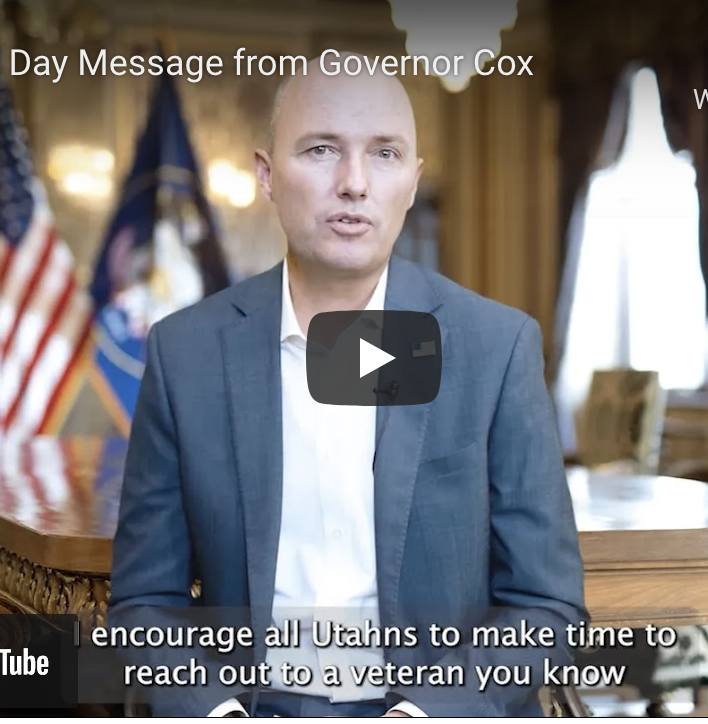 Governor Cox has issued an official declaration recognizing Veterans Day in Utah and shares a special message to Veterans and all Utahns.

“As Governor, I am beyond proud of the Utah Veterans… wherever Utahns have served, they have stood firm in the defense of freedom — not just protecting our liberties, but also helping liberate and inspire freedom-loving people around the world,” said Cox in his video remarks. “To those who have served, we thank you for protecting the many freedoms we enjoy as Americans and as Utahns. Thank you for your dedication and sacrifice and for being an inspiration to us all. Your example and continued contributions to your community, this great state, and our beloved nation will never be forgotten.”

“On this Veterans Day, and every day after, I encourage all Utahns to make time to reach out to a veteran you know and thank them for their service,” said Cox.

Whereas, on November 11, we come together as a nation to commemorate the service and sacrifice of our veterans who have worn our country’s uniform to defend and preserve our liberty and freedoms;

Whereas, we affirm our duty as citizens to express our enduring gratitude, both in words and in actions, for the Soldiers, Sailors, Airmen, Marines, Coast Guardsmen and Guardians who have served our country;

Whereas, we recognize and take pride in the social, economic, and cultural contributions our military and veterans make in Utah;

Whereas, we also thank and remember the families of our Veterans for the sacrifices, support and valuable contributions to our communities;

Whereas, both men and women of our armed forces continue to be an inspiration to all of us through their demonstration of courage, leadership and commitment in service to our state and country; and,

Whereas, we proudly honor and recognize all those who have worn the uniform, today and every day we salute and thank Veterans in Utah for their sacrifice;

Now, Therefore, I, Spencer J. Cox, Governor of the great state of Utah, do hereby declare November 11, 2021 as, Veterans Day in Utah

A .pdf version of the declaration may be downloaded HERE. To watch the full video remarks, please visit YouTube.